An Arduous Journey to Raise Awareness and Aid in Conservation and Recovery of Puget Sound Nearshore Habitat. 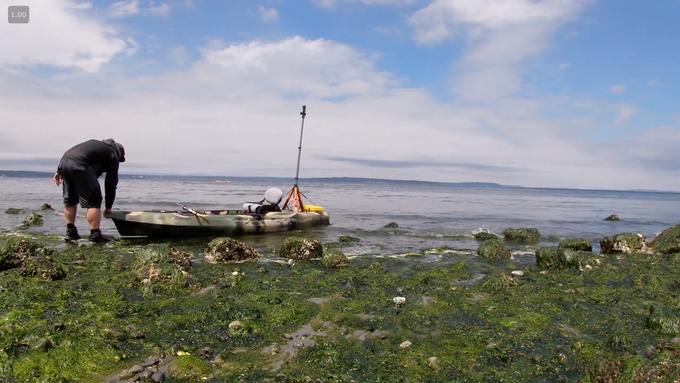 When you think of the President of an organization you think of a nice office and cushy chair, lots of meetings, phone calls and emails. Brian Footen, president of EarthViews, a Social Venture that maps waterways has a different kind of office. His chair is a kayak and his desk is the waterways of the world. Brian’s current meeting is with the Puget Sound Nearshore as he uses mobile mapping technology to map the entire 1200 miles.

“Street View style maps are a great way to engage people and show them places they will never get to see for themselves. At EarthViews we developed a way to create these maps but with a lot more attention to also mapping the data that is inherent to the locations”, Brian noted during a recent conversation about the nearshore mapping project.

Puget Sound is a critical estuary and home to Orca’s, salmon, oysters, clams and hundreds of other important marine species. However Puget Sound is in trouble. Water quality is diminishing and help is needed to conserve and recover this amazing and important waterway.

That is where EarthViews technology comes into play. While paddling along the nearshore Brian’s kayak is mounted with a camera that takes a 360 degree panoramic image every 10 seconds. Equipped with a water quality meter that logs water conditions every 10 seconds and a recording device that geolocates his dictation of animal sightings Brian is building a comprehensive immersive digital online map for everyone to explore the current conditions of the Puget Sound Nearshore. The map will be available on EarthViews Atlas.

These reality-based maps have many uses for waterway conservationists, recreators and natural resource managers including:

When asked how he hopes the maps will be used Brian summarized his feelings about the potential of EarthViews Nearshore Mapping project. “At their best I hope these nearshore maps are able to help scientists and conservation folks with the important work they are doing to help recover the ecosystem and I look forward to the ongoing conversations I am having with stakeholders in that regard. However, if in the end all that is accomplished is adding the Puget Sound Nearshore to EarthViews Atlas that shows nearshore conditions in the early twenty first century, and that imagery and data is archived with the Washington State Historical Society, I believe that we will have provided an important service for this generation and generations to come”.